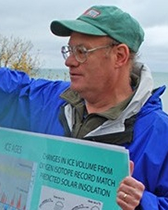 My research focuses on investigating plate boundary processes and deformation within the lithosphere using a range of techniques including seismology, space-based geodesy, and marine geophysics. At present, one major effort focuses on the evolution of North America's Midcontinent rift and of rifting processes worldwide. Another looks at a variety of topics dealing with earthquake hazard mitigation science and policy, including the fact that commonly used earthquake hazard mapping methods sometimes fail to predict what happens in large destructive earthquakes. I and colleagues are exploring how to assess how well these maps work, what causes the large uncertainties involved, and how to do better. Other topics include ongoing or past studies of earthquakes and earthquake zones that give insight into tectonic processes. These include the New Madrid seismic zone, the 2011 Virginia earthquake, the 2001 Bhuj earthquake in India, the 2004 Sumatra earthquake, 2011 Tohoku earthquake, and the Andes. Some studies, focusing on the thermal evolution of oceanic lithosphere, are cooperative projects with my wife Carol, who is on the faculty at the University of Illinois, Chicago. We try to do science, teach, advise students, and lead a normal life, which is a bit hectic at times.