New Evidence for Oceans Worth of Water Deep in the Earth

The research of EPS geophysicist Steve Jacobsen and University of New Mexico seismologist Brandon Schmandt provides new evidence for the existence of oceans worth of water found in deep pockets of magma located about 400 miles beneath North America.

The researchers have linked the deep melt with a process called dehydration melting, implying that minerals just above 400 miles depth still contain water dissolved into the rock, but release the H2O in mantle downwelling into the lower mantle. The presence of The findings were published June 13 in the journal Science, and will aid scientists in understanding how the Earth formed, what its current composition and inner workings are and how much water is trapped in mantle rock. Watch Steve's video interview on the PBS Newshour blog, The Rundown, or see related news links below to learn more. 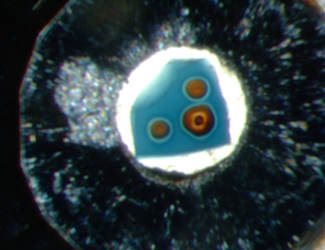 View into a diamond-anvil cell of a crystal of ringwoodite (blue crystal) at conditions found 400 miles below the surface. Within the orange spots, the crystal was heated to temperatures found at that depth, where dehydration melting was detected.