Several students and faculty from the department are headed to northern climes this summer to conduct different but complimentary research. Grace Andrews and Greg Lehn will collect water samples on two projects advised by Professor Jacobson in Western Greenland and Canada respectively. Then Everett Lasher and Jamie McFarlin, along with Professor Yarrow Axford, will fly to Northern Greenland to collect lake sediment cores. Finally, Dr. Rosemary Bush (EPS Ph.D. 2014) will field assist in Western Greenland while collecting samples for her own research and meeting up with Lasher and McFarlin for a few days of sampling together. 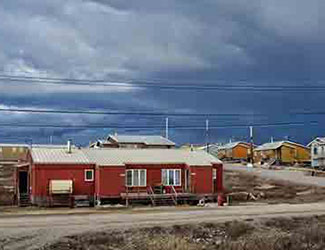 Jacobson’s Group: The National Science Foundation will fund two, three-year projects that will ultimately yield data to help scientists develop richer models on how the climate is changing in the Arctic and globally.

From her base at the Kangerlussuaq International Science Support (KISS) station in western Greenland, Grace, along with field assistants Nora Richter (recent Fulbright recipient) and Dr. Rosemary Bush, (EPS Ph.D. 2014), will collect samples of CO2 rich water emerging from under the Russell Glacier from 20 points along the Akuliarusiarsuup Kuua (river) during the melt water season (June-August). Kangerlussuaq is an Inuit community with a population of 500 and one pizzeria—the sole restaurant in town.

The work builds upon an earlier finding by principal investigator, Professor Andrew Jacobson, and his then postdoctoral researchers, Joel Moore and Jong-Sik Ryu: the water emerging from underneath the Russell Glacier in 2009 was three to ten times more saturated with CO2 than the atmosphere. When she returns, Grace will analyze the 2014 samples to learn what may be causing the CO2 concentration and answer other questions. She will repeat her collection during the 2015 melt water season for a richer dataset. This study will help researchers better understand CO2 evasion from the Greenland Ice Sheet.

Greg Lehn is going to Nunavut (Canada’s newest territory) and the Northwest Territories for one month to collect water, rock, and sediment samples from seven small rivers that feed into the Canadian Arctic waterways and Baffin Bay, an arm of the North Atlantic Ocean. 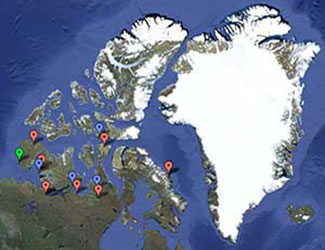 For this first stage of fieldwork in Canada, Greg Lehn and field assistant, John Kelly, will traverse the Canadian Arctic Archipelago in a Twin Otter aircraft, flying between Inuit settlements to rivers that feed into the Arctic and Atlantic Oceans. Analyzing the chemical signature of these rivers will aid researchers in understanding the freshwater budget to the Arctic Ocean, which controls currents, aids sea ice formation, and potentially influences global climate. In subsequent summers, Greg and researchers will use inflatable Zodiac boats to collect water from the river estuaries. To prepare for the trip, Greg participated in an Arctic safety course and wilderness first responder training.

Axford’s Group: Prof. Yarrow Axford and Ph.D. students Jamie McFarlin and Everett Lasher are traveling north to Thule, Greenland for the summer. Working with a postdoc, a Ph.D. student from collaborating institution Dartmouth College, and a bear guard, the team will explore recently deglaciated terrain on the margin of the Greenland ice sheet for clues about climate change during the last 11,000 to 130,000 years (the Holocene and possibly Last Interglacial). They will spend most of the field season camping at several backcountry research sites, which will be accessed by helicopter. The Axford Group will return from the field season with several sediment cores from a suite of lakes fringing the ice sheet. The sediments contained in these lakes record the response of the region to changes in the environment, providing valuable information about northwestern Greenland’s climate and the behavior of the ice sheet throughout the Quaternary. Understanding how the Greenland ice sheet has responded to past changes in climate is important for predicting how the Greenland ice sheet will be impacted by climate change in the future. This will be Axford’s 16th field season in the Arctic.

Prior to arriving in Thule, Everett and Jamie will also stop in the West Greenland town of Kangerlussuaq for 10 days to conduct lake sampling in an environment that is significantly different than that of the northern field area to use for comparative purposes. Once back home at Northwestern, Everett will continue to work on the improvement of measuring stable isotopes in lake organic matter, a proxy for tracking environmental change. He hopes to apply this technique to the Greenland sediments. Jamie will use chironomid species assemblages in these lake cores to infer temperature history and ecologic shifts, and is also working on expanding the use of specific biomarkers in high arctic lakes as proxies for climate change.

Rosemary Bush: Rosemary’s research will bridge both groups. Rosemary will collect plant, soil, and sediment samples in order to measure their biomarkers, including leaf wax lipids, and compound-specific stable carbon and hydrogen isotope ratios. These samples will serve multiple purposes. One goal is to assess the drivers of variability in leaf wax lipids in high arctic environments, where we don't have as much data as other ecosystems. Lipids measurements from modern plants, soils, and surface sediments from the Akuliarusiarsuup Kuua River and nearby lakes can be used, for example, to calibrate biomarker studies of sediment cores from local lakes (which is what Jamie McFarlin is interested in doing). A second goal is to measure biomarkers from the sediments being carried by the Akuliarusiarsuup Kuua out from under the Greenland Ice Sheet. If there are quantifiable amounts of biomarkers in these sediments, we can potentially use them to assess the ecological and hydrological conditions of the organic carbon reservoir that was overridden by the ice sheet when it expanded. This second goal is highly complementary to the work being done by Grace Andrews.

All of Rosemary’s analyses will be done at Notre Dame University, where she will be working as a postdoc under Dr. Melissa Berke.