Seth Stein and his father, Jerome Stein, find similarities among their disciplines, write a series of papers and a book. Don’t miss the Science Café Talk about their collaborations: 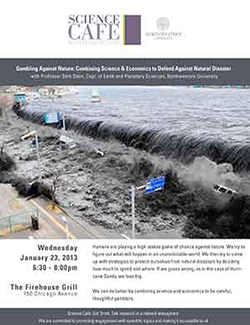 Seth had written a paper on the Tohoku earthquake and tsunami of March 2011, and Jerome, a professor emeritus of economics and a visiting professor in the Division of Applied Mathematics at Brown University had published a book on the 2008 financial crisis. Comparing notes, they realized that the events had certain similarities. Since then, father and son have teamed up to write a series papers. The first, "Gray swans: comparison of natural and ﬁnancial hazard assessment and mitigation,” was published in September in the journal Natural Hazards. The paper compares the two disasters, saying that the devastating impacts of both the Tohoku earthquake and the U.S. financial crisis “resulted from unrecognized or underappreciated weaknesses in hazard assessment and mitigation policies.”

A second paper, “Rebuilding Tohoku: A joint geophysical and economic framework for hazard mitigation,” was published last month in GSA Today, the news magazine of the Geological Society of America. The article examines how the effects of natural disasters can be most effectively mitigated at the lowest cost.

The father-son duo is currently working on a book, “Playing against nature: integrating earth science and economics for cost-effective natural hazard mitigation,” which explores the crucial question: how do we decide how much mitigation is enough?