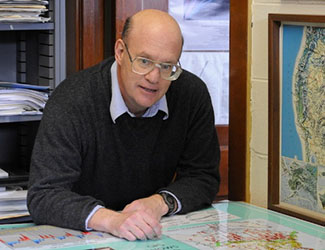 The Alexander von Humboldt Foundation has awarded Seth Stein a Humboldt Research Award. Humboldt awards promote academic cooperation between scientists and scholars from Germany and abroad. This award is granted "in recognition of a researcher's entire achievements to date to academics whose fundamental discoveries, new theories, or insights have had a significant impact on their own discipline and who are expected to continue producing cutting-edge achievements in the future."

Award winners are invited to spend a period of up to one year cooperating on a long-term research project with  colleagues in Germany. Seth and his wife Carol will spend the next academic year in Gottingen, Germany, collaborating with Dr. David Hindle and Professor Jonas Kley on problems in interplate and intraplate tectonics.