The project seeks to refine our understanding of the climatic and oceanographic changes that accompanied the onset of OAE2, just prior to the Cenomanian-Turonian extinction (a major earth-life transition due to global warming). The warming event, which was associated with oxygen depletion in the oceans, is believed to have been triggered by a massive volcanic eruption that emitted gigatons of CO2, warmed the planet, and acidified ocean waters, perhaps leading to some of the extinctions observed at this time. The acidification concept has never been explored in detail in the OAE2 interval, and Utah was selected as a study site because the rocks there preserve aragonitic shell material, which is sensitive to acidification. Changes in shell mineralogy in shelly fossils ranging from coccoliths to foraminifera to macroinvertebrates will be examined and a series of geochemical tools will be used to assess microbial communities and estimate paleotemperatures, oxygen levels, and other factors.

The team was joined in the field by Monika Wnuk, a reporter from the Medill Scholl of Journalism, who was supported with funding from the Carnegie Foundation to observe scientific research "intimately" as an embedded reporter. Monika was a trooper, jumping in to help the field work where she could, and toughing out the camping in 100° heat. She plans to submit her story on the project to Discover magazine. 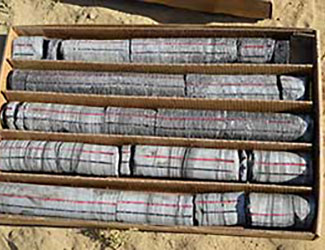 A box of core fresh out of the hole; the black and red lines document which way is up 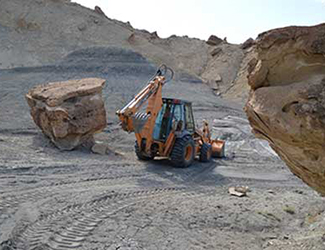 To expose fresh rock for sampling, a backhoe operator was contracted.... 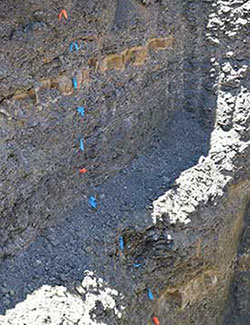 Expert excavator, Ray Rankin, made some perfect trenches to facilitate the outcrop work, and covered them after the job was complete so that our scientific work leaves no trace on land belonging to the Gland Canyon Recreation Area