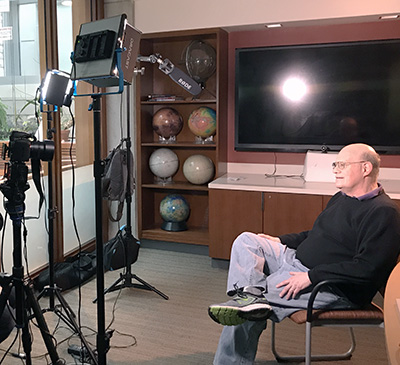 Professor Seth Stein was interviewed for Earthshaking: a Documentary about the Largest Earthquake that Never Happened.

Stein recalls: "December 3, 1990 was a very strange day in the little town of New Madrid, Missouri. Dozens of television trucks filled the normally quiet streets. Reporters and camera crews roamed around, filming and interviewing residents, tourists, and each other. Residents filmed the television crews. T-shirt and barbecue sales were brisk. Hap's Bar and Grill, the town's only restaurant, did a booming business that proprietor Jack Hailey described as an all-day party. Dick Phillips, mayor of the town of about 3200 people, described the day as a three-ring media circus.

All this came because Iben Browning, an eccentric business consultant, announced that there was a 50% chance of an earthquake with a magnitude about 7 in the New Madrid seismic zone within a few days of December 3, 1990.

The whole thing was silly. With varying degrees of enthusiasm, I and many seismologists tried to explain why the convincing-sounding prediction was nonsense. We’re used to this and have the script down pat. The media ask when the next major earthquake will occur in a particular place, and we explain that we can’t predict earthquakes, don't know if it will ever be possible to do so, and suspect that it won’t be.

I’d just watched with a mixture of amusement and frustration. However, I and colleagues from Northwestern got involved after watching a Chicago TV station play up the prediction. When we tried to convince the station to be more sensible, they said that they could and would do as they pleased. We had more luck with the newspapers, who enjoy needling their electronic competitors. After hearing our side, the Chicago Sun-Times’ TV critic Robert Feder described the stories as "an over-hyped but typically flimsy sweeps series."

By late November much of the area was preparing for the expected large earthquake. Many schools held earthquake drills and authorities made preparations including parking fire trucks outside. Businesses closed or took special precautions. Many people left the area or stocked up on chemical toilets, flashlights, generators and other emergency supplies. In Missouri alone, homeowners spent $22 million on earthquake insurance. Insurance sold briskly even in places like Chicago that were so far from the fault that homeowners wouldn’t collect even if the earthquake occurred.

ABC news invited me to join the festivities in New Madrid.  I probably should have, just for fun, but opted not to. As expected, after no earthquake happened, the story mercifully ran out of steam. It will be fun to see this strange episode being revisited in the new documentary."