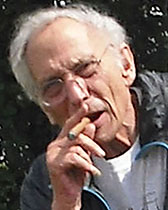 The concept of the geochemical cycles of the elements emerged in the middle to late 1800s, based on the studies of the water cycle from the 17th century, later understanding of the chemical composition of waters, sediments, and crystalline rocks, and the studies of plant photosynthesis since the late 18th century. The modern concepts of geochemical or biogeochemical cycles date from the 1920s. We are studying the interactions between the global biogeochemical cycles of the life-important elements carbon, phosphorus, and nitrogen by means of conceptual and mathematical models of these cycles that are compatible with the available data for the global C-N-P-O system in the remote and younger geologic past. The industrial and agricultural byproducts of human activity compete in their magnitudes with the sedimentary and geochemical processes on environmentally large scales. Human-made perturbations of the geochemical cycles and their long-term consequences are being studied at a global scale as well as within such specific environments as the land and the oceanic coastal zone. The broader goals of this research are to understand the natural and human-induced global change in the past, present, and future.

The most fascinating feature of the atmosphere of Titan, the largest satellite of planet Saturn, at 9.5 Astronomical Units from the Sun (Sun to Earth distance is 1 AU ≈ 150 million km), is the similarity to Earth’s atmosphere of its pressure and partial chemical composition. We calculated the rate of cooling of Titan since its accretion, the relationships between the occurrences of one of its major atmospheric components, gas methane (CH4), and its product ethane (C2H6). Ethane in Titan atmosphere condenses and rains on the satellite surface. The dense network of channels on Titan’s surface was analyzed as a possible product of erosion by liquid ammonium sulfate, (NH4)2SO4, liquid ammonia, NH3, and ethane, C2H6. The model results are consistent with the reported estimates of the volume of ethane contained in surface lakes and seas, and in the subsurface.

Gilliam, A. E., Lerman, A. 2016. Formation mechanisms of channels on Titan through dissolution by ammonium sulfate and erosion by liquid ammonia and ethane. Planetary and Space Science 132, 13-22.